Kim Jong-un, at age 30, is the world’s youngest leader, and there are only a handful of thirtysomething world leaders.

But if polls are correct, Sigmundur Davíð Gunnlaugsson (pictured above) may lead Iceland’s Framsóknarflokkurinn (Progressive Party) to victory in April 27’s parliamentary elections, giving the Progressives their best victory since 1931 and, perhaps, in its history.  That would make Gunnlaugsson, at age 37, the country’s youngest prime minister since its 1944 independence.

Icelandic voters go to the polls Saturday after a fairly tumultuous time over the past five years following the 2008 collapse of its banking sector, a massive depreciation and the introduction of capital controls on Iceland’s currency, the krónur, despite a return to tepid GDP growth after a 6.5% contraction in 2009 and an unemployment rate that’s now below 5%.

I’ll sideswipe the long debate among American economists over whether Iceland’s economic policy was smarter than that in Ireland or the Baltic states.  If you want an in-depth take from an Icelandic observer, read this instead.  I’ll add that Iceland’s ability to set its own monetary policy certainly helped it bounce back in terms of GDP growth, but it also glided the path for a massive krónur depreciation and inflation that’s eroded those gains that Iceland has made in the past five years.  Much of Iceland’s household debt, before 2008, was denominated in non-krónur currencies, and debt today is otherwise linked to currency or inflation indices.  That has made debt repayment, especially for home mortgages, a grueling nightmare in post-boom Iceland.

So the economic situation is Iceland is complicated, and though there’s a lot of evidence to suggest that Iceland’s economy might even be worse if it were part of the eurozone, that doesn’t mean that the everyday Icelandic voter feels like things are quite back to normal.

But politics, however, do seem set to return to the pre-boom ‘normal,’ given that the Progressives were a longtime ally of the dominant party in Iceland’s history since independence, the Sjálfstæðisflokkurinn (Independence Party), which was formed precisely — as you may have guessed — to enact Icelandic independence from Denmark.

The two parties are now fighting for first place in the April 27 parliamentary elections, and it’s virtually certain that they’ll form the coalition that constitutes Iceland’s next government.  No party in Iceland’s post-independence history has even won an absolute majority in the 63-member Alþingi, Iceland’s parliament.

Polls have shown the Progressive Party with a growing lead throughout 2013, stemming largely from their insistence that Iceland should not reimburse the U.K. and other governments for the Icesave debacle — non-Icelandic savers who had deposited their money in Icesave were wiped out in late 2008, and though their own government have largely made them whole, they have turned to Iceland for repayment with interest.  Although most Icelandic parties agree that Iceland should make the payment, the matter’s been tangled up in both domestic and international litigation, and the repayments are very, very unpopular among the Icelandic electorate.

But the Independence Party seems to be catching up once again, and the two parties are now essentially tied for the lead, meaning that either party could win the greatest number of seats in the Alþingi.  If the Independence Party does edge out the Progressives, Iceland’s new prime minister could be the Independence Party leader, Bjarni Benediktsson (pictured below), who only narrowly survived a leadership challenge a couple of weeks ago, when the party’s polling numbers were more depressed.

END_OF_DOCUMENT_TOKEN_TO_BE_REPLACED

It’s not everyday that the gang of all of the living current and former (and possibly future) presidents of the United States gather in one place.

But it happened today on the occasion of the opening of the presidential library of former president George W. Bush in Dallas, Texas — see above the ‘most exclusive club in the world,’ from left to right:

It’s notable that all of their spouses were well enough to attend as well, including Hillary Clinton, the former New York senator and until very recently, the U.S. secretary of state, who could well become the next president of the United States after the 2016 election: 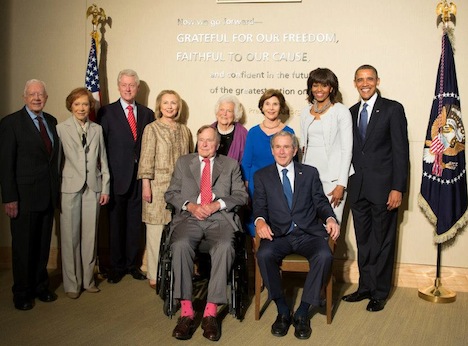 On a New York spring day on March 25, a long, long time ago (last decade), constitutional law scholar Noah Feldman was teaching administrative law to a gang of truculent law students when he stopped class in order to take us on a brief walk downstairs from the classroom to the Brown Building, which like everything else in downtown Manhattan, is now part of John Sexton’s growing New York University empire.

The reason was the anniversary of what happened there in 1911 — a fire at the Triangle Shirtwaist Factory, one of the deadliest industrial disasters in U.S. history, which resulted in the deaths of at least 146 workers, many of them young, female and immigrant.  The death rate was tragically higher because the factory managers locked access to the stairwells and other exits, so as to prohibit theft.  The disaster, which came just five years after the publication of Upton Sinclair’s The Jungle, detailing the unsanitary conditions of the Chicago slaughterhouses, became a major catalyst for a more progressive labor laws, greater employee rights and better workplace conditions.  Frances Perkins, who would become perhaps the most well-known U.S. secretary of labor in the 1930s, spearheaded the subsequent investigation into the Triangle Shirtwaist disaster.

I was heartened to learn that, on the day of the fire, NYU law students had helped to pull some of the workers there to safety.

I mention this because of the uncanny similarities to yesterday’s disaster at a garment factory in the nine-story Rana Plaza building in Dhaka that collapsed — like Triangle Shirtwaist Factory 102 years ago in New York City, the building was crowded, the fire doors and other exits were locked, and it’s fast becoming the worst garment industry disaster in Bangladeshi history.

Employees had the unenviable choice of jumping to their deaths or being crushed to death, much like the Triangle Shirtwaist workers who were forced to jump or to burn.

But I can’t help but note that Matthew Yglesias — a commentator that I usually find incredibly thoughtful, especially on all matters economic — wrote one of the lazier pieces of journalism I’ve read yesterday with a 360-word post in Slate on why it’s totes cool that Bangladesh can have collapsing buildings.  As it turns out, his piece featured barely one word for each dead Bangladeshi worker — now sadly, the death toll is already 243:

Yglesias is really channeling 18th century economist David Ricardo here, whose concept of comparative advantage still shapes much of international economics today.  The idea, for anyone who’s not taken an introductory economics course, is that countries should produce what they are most efficient as producing, produce a lot of it, and trade with other countries for the items that the country could produce less efficiently.  So Bangladesh should specialize in the things that it’s best at producing for the lowest cost — and it certainly seems like exporting clothing is one of those things, given that no country, excepting China, exports more clothing to the world.

Yglesias’s point is that it’s perfectly fine for Bangladeshis to specialize in cheap clothing because they’ll be able to produce it at less cost than, say, U.S. or German or Singaporean workers.  In that regard, he’s really arguing that Bangladesh’s comparative advantage is in cheap labor, and that’s of course a well-worn path for relatively poorer countries to become relatively richer countries — that was true in the United Kingdom in the 18th century, the United States in the 19th century, South Korea in the late 20th century.  Government regulation — whether that’s environmental regulation in China or workplace regulation in Bangladesh — adds additional costs to industry, it’s true, and that reduces the comparative advantage Bangladesh has in cheap labor.  That’s why Yglesias is arguing that it makes sense for Bangladesh to have lower workplace safety standards.

But Yglesias really doesn’t get the fundamental facts right — it appears that if the factory workers had listened to local regulators, who spotted the cracks in the building Tuesday, they would have never allowed their workers back into the factory in the first place, which has more to do with a culture of impunity and shady legal practices, not comparative advantage:

END_OF_DOCUMENT_TOKEN_TO_BE_REPLACED

Suffragio attempts to bring thoughtful analysis to the political, economic and other policy issues that are central to countries outside of the US -- to make world politics less foreign to the US audience. Suffragio focuses, in particular, on those countries and regions with upcoming or recent elections.